The grandiloquent product launch of Apple today, sounded something like this, “Today we’re presenting to you a revolutionary technology of Multi-Touch which is called 3 D Touch, which will make your smartphones respond to Force Touch, achieving an impeccable Pressure-Sensitive Touch.” Voila, in a mere 5 seconds, Apple gave birth to 4 synonymous words. That’s how laconic as it gets with Apple. However, with due respect to the engineering involved, a 3D touch essentially commensurates to converting your mobile screen into a mouse trackpad.

As an electronics engineer, I was highly intrigued by this development and I dug deep into the world wide web to explore the working. Extrapolating on the hint provided during the Launch presentation, it is based on the sensors which have been embedded on the display that sense the pressure with which the fingers are pressing the screen. Just like a mouse pad!

Source: US Patent and Trademark Office

For the lesser enlightened, FTIR stands for Frustrated Total Internal Reflection. On doing more search, I found out that Microsoft has been extensively working on this technology for almost a decade now. A research published by Microsoft defines a FTIR setup as follows: 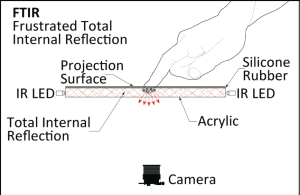 The most common FTIR set-up has a transparent acrylic pane, with a frame of LEDs around its edges, into which infrared light is injected (see Figure (left)). When the user touches the acrylic, the light escapes and is reflected at the finger’s point of contact due to its higher refractive index; an infrared-sensitive camera can then clearly see these reflections. A basic set of computer-vision algorithms is applied to the camera image to determine the location of the contact point.

According to this research paper, in 2007, Microsoft announced the Surface multi-touch table which uses the embedded multi-touch interactive screen and called it the Microsoft PixelSense experience. Not sardonically speaking, Apple has lived up to the reputation of wrapping around an existing, but dormant, latent or lesser known technology, with a premium user experience and stitching it to a broad based application, before presenting it in a flamboyant manner to the world.

This work is licensed under a Creative Commons Attribution 4.0 International License.

The joy of creation is unbeatable. I am a creative soul who loves to make things, be it a business plan or a software! I have traveled across the length and breadth of India and thus, I can easily identify with diverse cultures and species. Einstein said, "If you can't explain it simply, you haven't understood it well enough!" I too will make an attempt to say simple things in a simplistic manner through this blog. Browse through my Article Gallery above!